When you make cakes for other people, your kids are constantly brainstorming what kind of cake they want you to make for them.  Over the past year, we have been through a plethora of boy-related themes.  Star Wars ships flying around Death Star, Superheroes, various sports, etc.  I knew better than to plan too far in advance because finicky 6 year old brains were still at work.  But once they did decide, there was complete cake tunnel vision.  And boy were they demanding.  They were constantly adding to the complexity of the cake and checking on my progress and what my timeline was for completion by party day.

Well, the big party was last weekend and it sounds like Mom passed the test.  But, I have to say that this cake stressed me out more than any other.  Technically, it incorporated several different techniques and it took 4 separate cakes and 5 days to build it.  I would have liked to have more time to adjust the supports for the structure, but all in all, it was a success.

The final verdict on cake theme was military in nature. One boy loves tanks, the other loves any aircraft, both love ships. I needed to find a way to tie it all together, so the result was an aircraft carrier cake complete with control bridge and painted chocolate vehicles.  And as both Grandpa and Papa are former Naval Officers, I also thought they would especially appreciate the result. 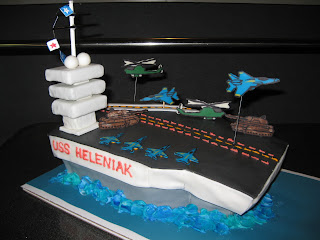