Last week had me working on another birthday cake for a sweet neighborhood boy named Jack.  Jack is the same age as my boys and we have known his family since moving in 5 years ago.  His brother was the recipient of the "Batman cake" from last May, so Jack asked for the cake lady to make his as well.  I think I am gaining a following from the kiddos!

Jack's party was at a local sports complex called Windy Hill.  They have go-carts, golf, baseball..all the makings for an all-around fun day!  Jack was the most excited about the go-carts, so that became the focus of the cake.  I made crowd-favorite White Almond Sour Cream cake topped with Vanilla Buttercream and fondant decorations. 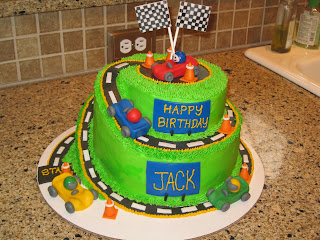 I am already at work thinking about his brother's LEGO cake, due in May!

Confectionately yours!
Posted by Cathy at 10:34 AM