Whew!  I am plum worn out!  This week brought the 1st week of second grade for the twins, catching up on house stuff and volunteer tasks and what might be the most detailed cake that I have tackled thus far.

I was asked by a former co-worker to make a baby shower cake to match the theme of vintage nursery rhymes.  Such a cute concept and the fabric and art samples that she provided for inspiration were just beautiful.  I really wanted the cake to capture the vintage quality of the toile - the watercolor effect of the details, soft colors and realistic expressions of the characters.  This would be a tall order, given that fondant characters so often come across looking very cartoon-like with sharp colors and edges.  So, I set out to attempt a new technique for me...painting on fondant.  Instead of using fondant to create all the features, I decided to paint them on so that they would look like a watercolor painting.  I also wanted to create a toile effect by painting on the fondant background.  Here are the inspiration pieces that Amanda provided. 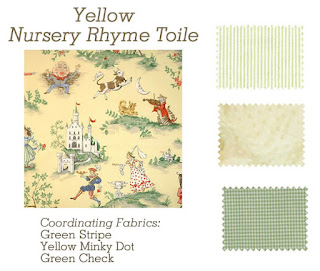 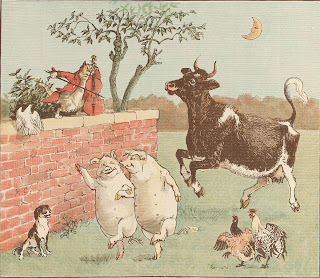 The cake itself was White Vanilla Sour Cream with raspberry filling and chocolate buttercream, covered in vanilla fondant. The figures were all hand-sculpted or cut fondant and hand-painted. When I say "paint", I of course mean with edible coloring.  I used gel food colors, thinned with vodka.  The vodka dilutes the coloring, but then the alcohol evaporates, leaving the dried color.  I scoured the internet to find just the right character images from which to gather ideas for colors and details.  That is the part that I love the most. I especially love the 3 blind mice.  They are sparse in detail, but I feel that they say so much! 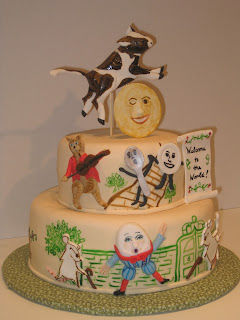 The cat with his fiddle serenades the dish and spoon as they high-tail it up the brick road.  Upon reviewing my photos, I realized that I forgot to give the cat a tail!  Woops! I do love how Humpty Dumpty turned out.  He is such a well-dressed egg! 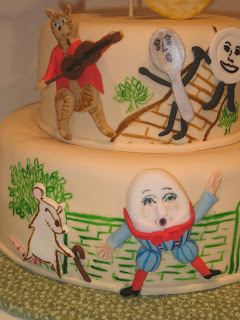 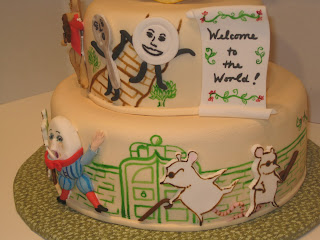 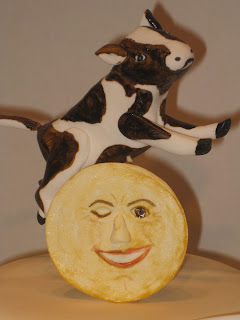 The back of the cake completes the story of where all this "once upon a time" takes place.  It looks so peaceful and fanciful..exactly what a nursery should be. 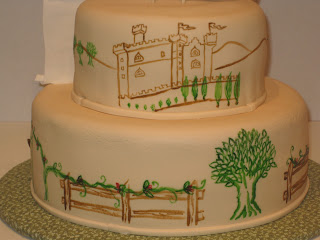 Thanks to Amanda for the opportunity to be a part of the celebration!

Email ThisBlogThis!Share to TwitterShare to FacebookShare to Pinterest
Newer Posts Older Posts Home
Subscribe to: Posts (Atom)
CREO is licensed and insured. My kitchen has been inspected and certified as a commercial kitchen by the VA Department of Agriculture.