Last week, I updated you on some of the projects that I had recently completed in the playroom and Avery's room.  This week, I completed several changes in Peyton's room.  We had separated our twins into separate rooms when they were 4...complete with an HGTV-style reveal.  They literally went to pre-school one day and when they came home that afternoon, I had overhauled each of their rooms and graduated them from toddlerhood to little boy land.  Of course, I had been working on pulling all the pieces together behind the scenes/doors...painting, compiling, organizing.  It was a special day for them as it was the first time that our "twin unit" were being separated and allowed to really start to grow into their own little people.

Peyton's room was the room that they originally shared.  I had painted it a fantastic, rich leaf green color when we first moved in and I still love it.  When he was 4, his room became dedicated to his love of animals, so there were tons of nods in that direction.  He is, however, my little 8 year old who thinks he is 16.  There is something about him that just acts older...like he gets alot more than he should.  It makes me sad, but impresses me at the same time.  He is hyper-aware of details and always wants to know what the plan is, so when I caught the bug to switch his space up a bit, I wanted his input.

The catalyst for this whole thing was the power outage during the Superbowl.  I was completely content watching the game, but when the power went out, I got bored, picked up the iPad and started surfing Craig's List for furniture.  Peyton had mentioned a desk a few times and he definitely needed some more storage in his room.  I stumbled upon an oak student-sized desk with a chair for $20.  It was solid wood, which I wanted, so the boys and I headed out the next day to take a look.  Turns out it was Stanley (a great brand) and in great shape.  So, Peyton approved and I brought it home to prime and paint it the same medium-toned grey that we have in the dining room.  I also covered the chair seat in a fabric that I had laying around and put on some new drawer hardware.  I forgot to get a photo of the original finish, but here it is being primed. 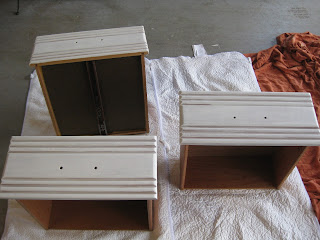 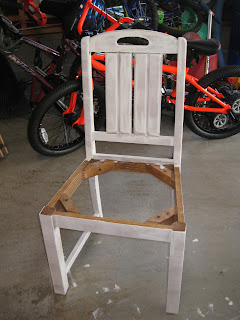 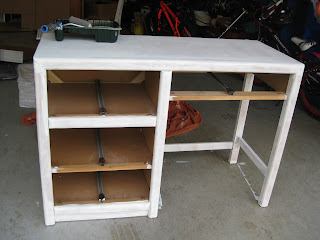 In addition to the desk addition, I had a couple of other things that I wanted to overhaul/add.  The first was a giant bulletin board that I had made for him a couple of years ago.  I think I got this idea somewhere online (pre-Pinterest), and I loved the scale and cost of it, so I made one for both boys.

Start with a sheet of this foam insulation - I think I found it in the roofing area of Lowe's.  The sheet was big enough to cut in half for 2 of them. 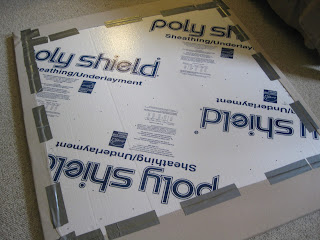 Then, literally just wrap it with fabric and secure it with Duck Tape.  Easy-peasy!  The original was wrapped in an inexpensive red cotton fabric, but I am going for neutral accents this time, so I just used a $5 drop cloth. The whole board only weighs about 3 lbs, so I used Command strips to secure it to the wall.  Here's the finished desk with the bulletin board above. 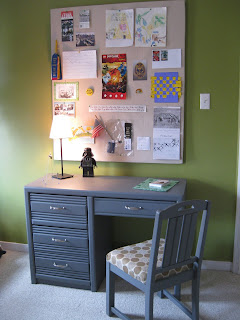 Finally, I come to my FAVORITE part!!  Since I had done a paint treatment on the walls of both the playroom and Avery's room, I wanted to do something special for Peyton as well.  He wanted something cool and industrial looking and I wanted something that would grow with him and that he would still appreciate once he was too cool for school.  So, the grey paint ended up doing triple duty.  I used it to paint his headboard (a handmade Pottery Barn look-alike from the local antiques market - $35) and also created a feature wall of chevron pattern.  However, I added a twist by making the chevron emulate steel beams with rivets.  I am CRAZY for how this turned out!! 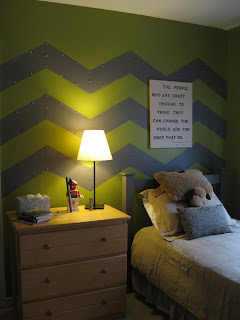 This design required alot of calculating, measuring and Frog Tape, which worked great!  It's like blue painters tape, but provides a much better seal, reducing the bleed that often occurs with the blue stuff.  The "rivets" are actually faux nailheads.  I bought a roll of them in the upholstery section of Joanne and used tin snips to cut them into individual pieces.  As I didn't want to put a bunch of holes in the wall, I only used the ones without the spike.  To secure, I used blue DAP moldable adhesive, which will allow me to remove them later without damage to the wall.  It turned out exactly as I had envisioned!

The quote over the bed is an old canvas, covered with drop cloth (obviously, one of my favorite diy materials) and stamped.  It's from an Apple ad from the 1997 Think Different campaign and reads "The people who are crazy enough to think they can change the world are the ones that do".  Some powerful motivation for my wild child. 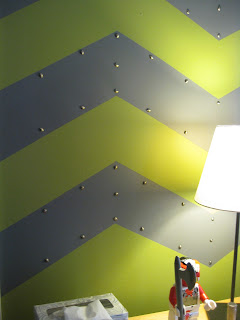 Peyton and Mommy are both very happy with this space.  And it was such an inexpensive transformation!  Now Avery is asking for a desk too.  Hmm...I wonder what ideas that will spawn? ;)

Up next, wedding season is upon us!

Confectionately yours!
Posted by Cathy at 10:44 PM