Business has been brisk over the past several months!  I am so thankful to all of those who have trusted me with their visions of the perfect cake for their special occasions.  It is such a stimulating experience concepting and creating for them and the whole process puts me in my happy place.

I have a couple of projects to share.  First up, a birthday cake for a 2 year old boy who has a love for Mickey Mouse Club.  His Mom, Lauren, and I decided on a fondant covered cake since the clean canvas that it provides lends itself to the cartoon-y quality of the theme.  She also requested a Mickey figurine, which I incorporated with other icons from the show.  I found a tutorial for the modeling of Mickey's head, but was able to improvise the rest of his body through reference to several illustrations.  I think he turned out pretty great!  Thank you, Lauren! 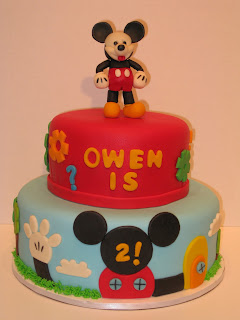 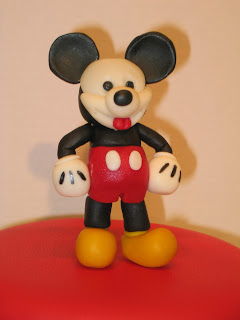 Next up is a very exciting cake for me for a couple of reasons.  It is the first cake that I have been asked to make for a client of the Salisbury Country Club.  I was placed on their referral list last year and the event coordinator there has been very supportive of me and my work.  The couple that requested this cake was planning a wedding and after a tasting, booked me right away.  They are just the sweetest people and I was thrilled to be chosen for this honor.  They came to me with the idea of stacked gifts and requested alternating tiers of vanilla and chocolate.  They also wanted their colors of yellow and lavender incorporated into the ribbons and bows on the "gifts".

Cake tiers are 14", 10" and 6" squares, enough to feed about 120 guests.  Flavors are White Almond Sour Cream with Vanilla Buttercream, Choco-Mocha with Chocolate Buttercream and Choco-Mocha with Vanilla Buttercream.  All delicious combinations!  Ribbons and bows were constructed of fondant and modeling chocolate and painted with Lustre Dust to give them a subtle sheen.  Let me tell you, this cake weighed about 50 lbs!  I had to get my husband to help me with the delivery as there was no way I could lift it alone and not touch the buttercream.  Thanks, honey, for the support!  I pay him in cake;)

The bride, Gloria, took the time to call me the day after the wedding to thank me and tell me how much they and they guests loved the cake design and flavor.  It was even better than they had envisioned, she said.  THAT is what a caker strives for!!  Many thanks and years of best wishes to Gloria and Tony! 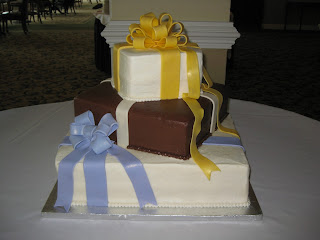 Until next time...confectionately yours!
Posted by Cathy at 10:17 AM No comments:

I had a big week in the kitchen with some wonderful projects.  I feel like every cake that I work on is my favorite at the time, but I have to say that one of the projects that I did this week is definitely in my top 5.  Not only for the design elements of the cake, but for the creativity that the client allowed with flavors and her additional request to add buttercream shots to elevate the dessert table to something very special and unexpected.

The occasion was a bridal shower for a nephew and his bride-to-be.  This is a couple that is very creative, with a love for the outdoors.  He is a graduate of the Art Institute of Chicago and specializes in woodworking, which includes actually making and playing banjos.  So the hostess of the party, my friend, Jodi, asked me to create a figurine of the couple with the following details: in a canoe, him playing banjo, her rowing the boat, him with a fedora and her with auburn hair, braided and wrapped around her head (as shown in the photo that she provided to me).  Funny enough, this level of detail doesn't really scare me that much.  I love the challenge of figuring out how to assemble the puzzle and make it all as custom as possible. I used a combination of modeling chocolate and fondant and I am beyond thrilled with how this turned out. 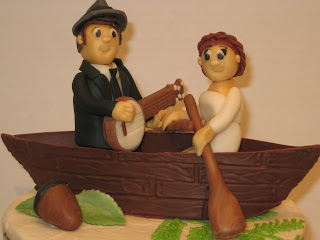 For the cake, we decided on a birch tree effect with their initials "carved" into the tree.  This was an adult gathering, so we could go nuts with flavors and decided on White Almond Sour Cream cake on the bottom tier, Mexican Hot Chocolate on the top tier..and all iced in Kahlua buttercream.  Yum!! 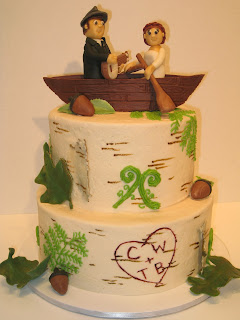 The peeling birch bark was achieved by rolling out some white modeling chocolate and "tearing" it into pieces so that the edges were jagged.  I then painted the back of the pieces with a mix of brown and black food coloring to give a shadowed effect.  Once dry, I glued them to the cake with buttercream, but allowed one side to stick out as though the bark was peeling off.  The marks in the surface and "carved heart" were made by painting (with food coloring) on the crusted buttercream.  The leaves and acorns were molded of modeling chocolate and the ferns were piped with buttercream. 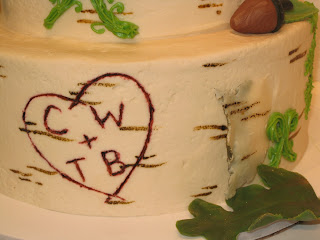 Also on the table were buttercream shots.  But not just ANY buttercream shots!  Champagne and Bailey's buttercream shots!!  Of course I had to taste as I was making these...one of the hazards of caking ;)...but boy was I happy to indulge this time!  And they were a great dessert treat for the gluten free guests. 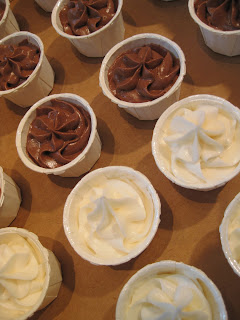 I heard from Jodi this morning and word is that everything was a big hit!  I love it when everything pulls together so nicely and all the elements come together to match the image in my mind and the client's mind.  A huge thank you to Jodi for thinking of me for this event...it was an honor!

Confectionately yours!
Posted by Cathy at 6:36 PM No comments:

Email ThisBlogThis!Share to TwitterShare to FacebookShare to Pinterest
Newer Posts Older Posts Home
Subscribe to: Posts (Atom)
CREO is licensed and insured. My kitchen has been inspected and certified as a commercial kitchen by the VA Department of Agriculture.