Ok - sorry I had to leave so abruptly last time.  Time got away from me!

So let's see, the next project I would like to show you is my "fake it til you make it" version of the distressed wood island in the inspiration photo.  For those of you who have not seen it or just want to get lost in its beauty all over again, here it is... 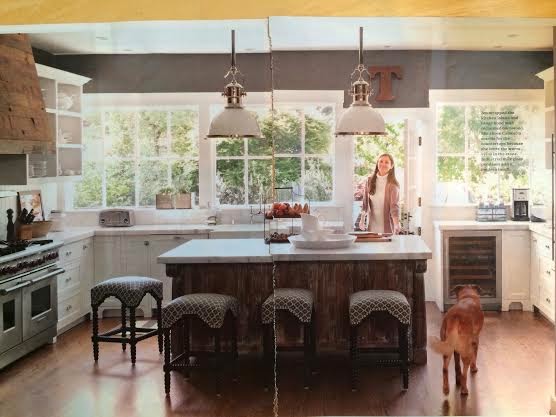 Well, I don't have a true island like this one, just a peninsula.  And I didn't want to completely rebuild anything, just cover what is currently there.  Additionally, I wanted to ease into it.  Wasn't sure how much of a commitment I wanted to make in case it didn't turn out the way I had planned.  Jeez, I obviously had many conversations with myself over this whole thing.  Got a little sick of my internal dialogues after awhile.  Anyway...I decided to start with the end of the peninsula.  The part that is most visible from the family room.  The rest of the peninsula that could be covered is only visible from the kitchen dining area anyway.  Here's the "canvas".  More on that crazy dishwasher later.  That's a completely different story. 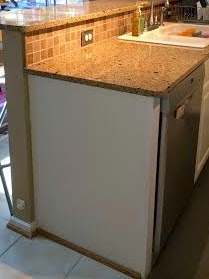 You can't really tell from the picture, but the end panel is slightly recessed, giving me about 3/8" to play with.  Not much, which really limited the kind of wood that I could put there.  I wanted to try Stikwood, which are real wood panels that are thin with an adhesive back that are created specifically for decorative wall installations.  Exactly what I needed.  However, it's crazy expensive because you can only buy in larger quantities.  I would have had to spend about $300.

So I started checking out everything I could find.  Real distressed wood, "distressed look" engineered, laminate, pretty much anything they have online and in stores.  Since this was more of an experiment, I decided to go with something easy to work with and inexpensive.  The winner was an adhesive vinyl plank from Lumber Liquidators.  What??  Not at all what I was planning on, but it is actually a decent looking product and the price was right!  $20 for the entire box, which leaves me quite a bit to spare.  It even has texture to it and you can't tell it's not real unless you get right on top of it. 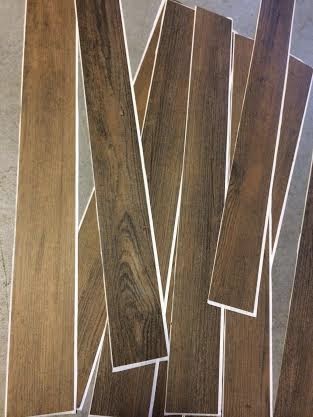 Instead of a permanent installation, I decided to start with cutting another end panel - exactly like the one that you see in the before pic.  That would be a "backer board" for my wood so that I would not have to permanently attach the wood to the unit.  If I didn't like it or got tired of it, I could just take it off!  Yes!

Once I had my backer board cut to size, all I had to do was start to lay the planks.  I chose a diagonal pattern, which is a little unexpected and draws even more attention to the area. 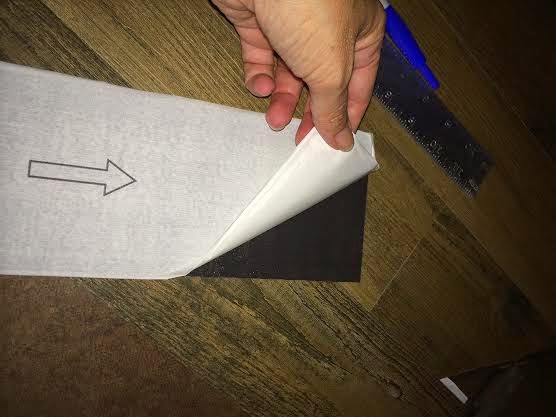 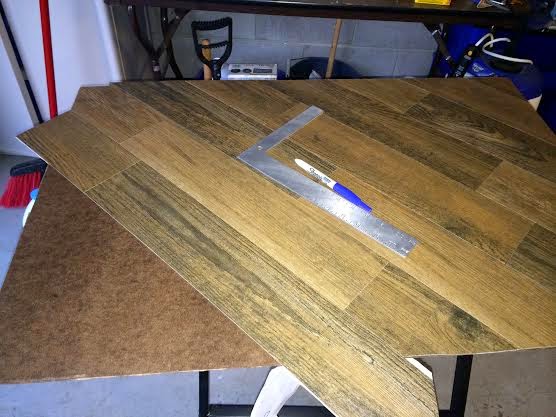 The most amazing part is that because these are so thin and pliable, I literally cut the excess off with a pair of scissors!  No sawing necessary! 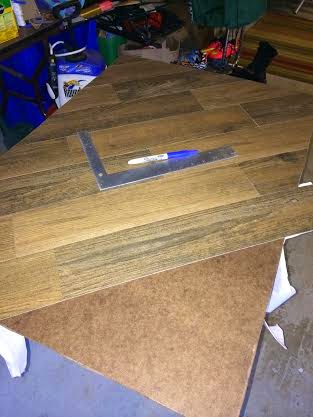 Once they were on and I was happy with the result, I put the panel in place and attached it with a nail.  Yep, one nail did it. 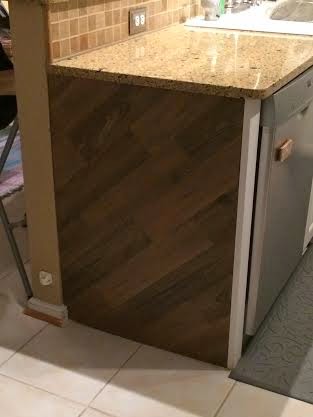 I have to say I am pretty darn happy with it.  Much of it gets covered with the trashcan, but it's still a very impactful feature and I often find myself admiring it when I am sitting in the family room.  Mmm, so pretty!

I do need to go back and use some stronger adhesive on some of the pieces.  Because the dishwasher is adjacent, the heat from that sometimes loosens the glue and the planks fall off.  No worries, I'll just use a stronger adhesive and they should be fine.

What do you think?  More lovely kitchen details coming in Part 3!